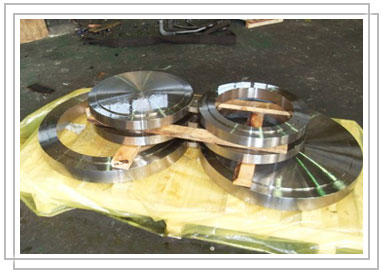 What is a Spectacle Flange?

A spectacle flange is a specialty flange made of two metal discs attached in the middle by a small section of steel. Spectable flanges get their name because they look like a pair of reading glasses, or spectacles. Spectacle flanges, also known as spectacle blind flanges, are most commonly used on piping systems that need to be separated regularly or where the flow through the systems is regularly stopped. One end of the spectacle flange is solid, while the other end has a hole in the center. The spectacle flange can be rotated to place either the solid or hollow end within the pipe system, thereby opening or closing the flow.


Why You Need a Spectacle Flange

When a pipeline needs to be isolated most people consider using a valve to shut off the flow. However there is one recurring problem with valves which everyone will have encountered at some time.

Over a period of time residue can build up in the valve seating preventing it from fully closing. Even when the valve is operated to its full extent, there is still a small gap caused by the obstruction making it impossible to fully close off the flow of liquid.

In a lot of situations this tiny residual flow when the valve is ‘closed’ is not a significant problem. However in some cases, such as when a pipeline has to be dismantled for maintenance, even the slightest flow can be a problem, particularly if the liquid is high temperature or toxic.

The answer is to use a spectacle flange. This is a flange plate which as its name implies is shaped like a pair of spectacles only in this case one spectacle is open and the other is blanked off. This plate is installed in the pipeline between a pair of flanges. In normal operation the plate is installed with the open side in the pipeline so it does not restrict the flow. However, once the pressure has been taken off the flange plates can be loosened and the spectacle plate changed to put the blind side in the flow. This will completely seal off the flow making the line safe to work on.